Is it market rules or market forces driving challenges for coal-fired generators? Our industry expert will take a deep dive into these matters to help you better understand the cause and effect on energy prices.

Since the opening of the first competitive retail electric markets, there has been an ever growing and evolving set of product offerings. Electric supply products are continuously reshaped to meet morphing regulatory climates, fluctuating markets, and the shifting strategies of both the suppliers and end-use consumers.

In recent years, electricity generation has been a focal point. Coal-fired generation plants have retired at an alarming rate and nuclear power plants struggle to avoid closing, while a flurry of new natural gas power plants are being brought online. What is the driving force behind the challenges coal generators face today? In this edition of Customer Insights, our industry expert will dive deep into these driving forces to help you better understand the cause and the effect on energy prices.

On January 8, 2018 the Federal Energy Regulatory Commission (FERC) rejected a rulemaking directive by the Department of Energy (DoE) to extend a financial lifeline to struggling coal-fired and nuclear plants. Back in September, the DoE in its Notice of Proposed Rulemaking (NOPR) had stated that “the resiliency of the nation’s electric grid is threatened by the premature retirements of power plants”, recommending FERC develop a cost recovery mechanism for fuel-secure generation resources for their resiliency and reliability attributes that are not equitably compensated due to the “chronic distortion” in competitive markets. The DoE went further, quoting an earlier letter to FERC from the chairmen of the Senate and House Committees on Energy that “the broad scale premature retirements of otherwise performing baseload units because of market rules – rather than market forces – would represent a failure of regulation”.

The argument put forth by the DoE, and many others before it, was that the flood of coal plant retirements is a direct consequence of discriminatory market rules – such as environmental regulations and renewable energy subsidies – forcing a rapid decline in coal-fired generation over the past decade that threatens grid reliability and may result in volatility in wholesale power markets. While it is undeniable that the confluence of a number of trends have all contributed, it may be worth exploring if it is regulatory pressures or rather market fundamentals, such as low natural gas prices, that have struck the decisive blow in the downfall of coal. 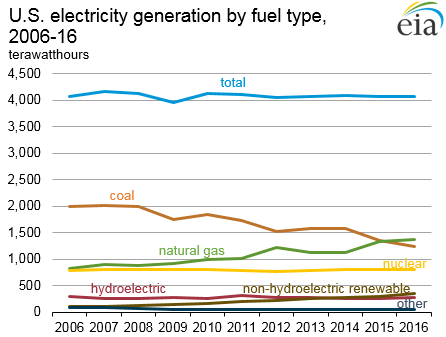 Over 40 GW of coal capacity has been retired in the past five years, with 15 GW of capacity shut down in 2015 alone. While there is evidence that the vast majority of capacity taken offline was prompted by looming environmental compliance deadlines, only around 30% of the decrease in generation can directly be attributed to retirements.

The majority of the closures have been of smaller, older and less efficient subcritical units well past their useful lives. The ballooning costs of operating and maintaining this aging subcritical fleet had made them uncompetitive long before some of the onerous environmental regulations, like the U.S. Environmental Protection Agency’s (EPA) Mercury and Air Toxics Standards (MATS) kicked in. MATS, which went into effect in May of 2015, only accelerated the day of reckoning of these uneconomic units.

The rest of the decline in generation is attributable to lower capacity utilization as wholesale power prices have tumbled tracking the price of natural gas closely. The absence of any demand load growth has only exacerbated the problem. This does bode well for the surviving coal fleet, however, as there is a substantial amount of unused capacity that any sustained strength in demand and, in turn, power prices, could result in a rebound in output from coal generators. This was briefly evident during the cold spell that gripped the U.S. during the first week in 2018. Generation from coal-based sources served almost 40% of the total load requirement, nearly twice as much as natural gas units.

Competitive wholesale power prices are primarily determined by the cost of fuel. Natural gas generators with shorter run times and quick ramping abilities often used at peak times to power the grid play a critical role in determining the marginal unit that sets the price. While there are several other variables, such as operational constraints and non-fuel expenses, cost of the primary fuel and unit heat rate (a measure of efficiency) have the largest influence in marginal cost calculations. Thus, lower natural gas prices lead directly to lower wholesale electricity prices. 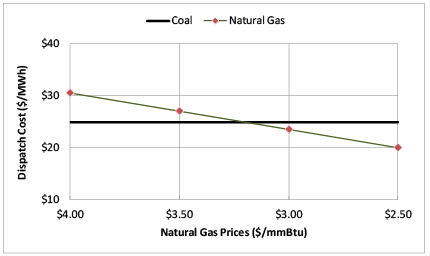 This is the price environment coal generators find themselves in today, with natural gas prices having been in the $3/MMBtu range for the past several years. With abundant supplies from the Marcellus and Utica shales and rapid development in pipeline infrastructure to deliver to demand centers, natural gas prices are expected to stay below $4/MMBtu for the foreseeable future. Lower natural gas prices, combined with superior operational flexibility of modern natural gas plants, has alleviated overall power price volatility as well.

In competitive power markets, generators are also compensated for their availability and reliability through capacity payments. PJM has a mature capacity market that conducts annual auctions three years into the future to ensure adequate supply and reserves to meet anticipated demand. In spite of the market reforms triggered by the squeeze in supply experienced during the polar vortex events of 2014, the absence of any meaningful load growth and entry of 3 – 4 GW of new natural gas combined cycle plants every year, capacity clearing prices in PJM capacity auctions have plummeted. The prices, down from a high of $165/MW Day for the 2018/19 delivery year to $76/MW Day in the most recent auction conducted for planning year 2020/21, suggest a heavily oversupplied market. With greater maintenance and capex requirements in addition to the fixed costs associated with installation and maintenance of the myriad of complex emissions control equipment, coal generators are struggling to survive in the capacity markets as well.

In its unanimous rejection of the DoE proposal, FERC categorically rebuffed the DoE’s assertion that the power pricing mechanisms currently in place were fundamentally deficient, adding that, while market dynamics have indisputably swung in favor of natural gas, there appeared to be no immediate threats to the reliability of the bulk electricity system.

The repeal of the Clean Power Plan in October by the EPA, and the current uncertainty around some other impending regulations, has only provided temporary breathing room to coal generators. Even in the absence of any new regulatory policy pressures on coal, the transformation of the power markets driven by the abundance of cheap natural gas supplies appears to be unstoppable.

Keep in touch by signing up for an online subscription for AEP Energy’s Customer Insights by clicking here and navigating to the bottom
of the page.

AEP Energy does not guarantee the accuracy, timeliness, suitability, completeness, freedom from error, or value of any information herein. The information presented is provided “as is”, “as available”, and for informational purposes only, speaks only to events or circumstances on or before the date it is presented, and should not be construed as advice, a recommendation, or a guarantee of future results. AEP Energy disclaims any and all liabilities and warranties related hereto, including any obligation to update or correct the information herein. Summaries and website links included herein (collectively, “Links”) are not under AEP Energy’s control and are provided for reference only and not for commercial purposes. AEP Energy does not endorse or approve of the Links or related information and does not provide any warranty of any kind or nature related thereto. Forward-looking statements contained herein are based on forecasted or outlook information (including assumptions and estimations) but any such statements may be influenced by innumerable factors that could cause actual outcomes and results to be materially different from those anticipated. As such, these statements are subject to risks, uncertainties, fluctuating market conditions, and other factors that may cause actual results to differ materially from expectations and should not be relied upon. Whether or how the customer utilizes any such information is entirely its responsibility (for which it assumes the entire risk).